With all the stories I’ve had so far about wine, I’m sure you think that must be all I ever drink!  Do not be fooled; apart from at least 50 ounces of water per day, I also like a good beer.  I am not a typical Budweiser drinker (though I have been to their factory in St. Louis and it is impeccably  maintained with those fancy Inbev dollars), but I love a good craft beer.  Texas has become one of the fastest growing craft beer states, and it’s always fun to go visit local places to try out new brews.

The same goes while traveling.  We always try to visit a local place or two so we can try beer we can’t get at home.  We’ve been to a lot of different breweries on our trips: Cayman Island Brewing, Cigar City Brewing, and Skagway Brewing Company, to name a few.  I may even have brought Cigar City’s Jai Alai home in my checked luggage multiple times from areas where it is distributed, but luckily the TSA only looked in my bag and didn’t pop one open.  Each brewery has their own system of beer flights, and typically we will each get a flight and decide from there which beer deserves to be enjoyed in a full pint. 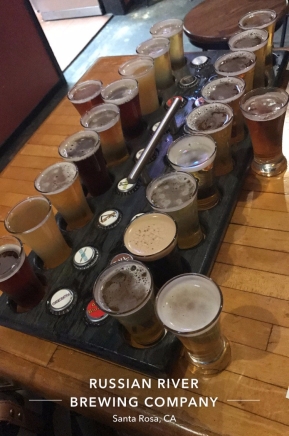 While we did have our fair share of wine in the Napa and Sonoma area, we went to visit Bear Republic Brewing in Healdsburg, and had plans to go to Lagunitas. However, the man pouring our samples at the Seghesio Vineyard recommended we stop by Russian River Brewing Company on our way back to the hotel.  Since they do not distribute to Texas, we decided to give it a try, and when we both said that we wanted a flight, we found out that it was actually a twenty-one sample flight including every beer they brew.  Of course, we had to get one, and of course we definitely shared it.

I really enjoyed most of their beers, and we ended up choosing our favorites for an obligatory pint after we had finished the flight We also thought a good layer of cheesy pizza bites would be a good purchase too.  I don’t typically like sour beer, but their Consecration, which was aged in Cabernet barrels, was excellent, so maybe someday we will luck out and they will distribute here.  And I’m pretty sure other breweries need to catch on to this flight system; not only does it look impressive, you get a little bit of everything.  What’s not to love?

You May Have Missed…