I made a pit stop on my road trip in the city of Holland to see the Windmill Island Gardens. It was closed for the winter, but you could still walk around the area and take photos. Apparently over 100,000 tulips bloom there in the springtime, but I was there on a chilly, grey day in October. So while there was not much happening on the grounds, I’m still glad I stopped by for a quick look, if only to stretch my legs.

The first time I ever rented a car it was the strangest feeling. I spent extra time making sure all my mirrors were correct and that my seat was just right. I was also terrified of having an accident in it; my company included the damage waiver on rentals, but it was my first job out of college and I didn’t want to have to call my boss to tell her I’d hit a wild hog in South Texas that turned my car into an accordion.

Now, renting a car is just business as usual, except for what I call the “Rental Car Lottery.” I typically reserve a standard sized car, but that is apparently the size car that most people rent. Chances are, when you arrive at Enterprise you will receive an automatic upgrade to a different class of car, or something completely different than you expected. This can work for or against you. For example, I had the pleasure of getting a Hyundai Accent at O’Hare airport, and had to road trip that thing up and down Michigan before dumping it in Cleveland. I’ve never been happier to get rid of a car, except maybe three weeks earlier in Ft. Lauderdale.

Because of Hurricane Irma, Enterprise had rented every available car except for white utility vans or minivans. The agent threw in a free tank of gas for my troubles after noticing the look of horror on my face. The poor elderly couple in front of me had just selected their minivan, and considering they almost ran over an employee while trying to exit, I’m betting they wished they didn’t have to drive one either.

I had room for 8 imaginary friends in my Dodge Caravan, and cruised into both Miami and West Palm Beach looking like the baddest bitch in town. The most humiliating part was the valet-only option at my West Palm Beach hotel. At least it had leather seats?

Of course you don’t always end up with a terrible car. Two years ago in Ft. Lauderdale I lucked into a convertible Camaro, which was the perfect car to drive up the Florida coast. The free BMW upgrade I got one other time made for a fantastic trip across Texas. However the Kia Soul I got in San Diego? My only request was that it did not come with hamsters. I’m sure the agent never heard that one before.

I mentioned yesterday that I was busy planning and booking flights, hotels, and car rentals for my fall travel schedule. It always varies year to year, but this year I will be gone most of the end of September and all of October for multiple multi-city trips.  I typically fly a lot of places, but this year, since we are expanding and going to more cities, I was looking at ways to make things a little more economical.  Thus, I will be going on quite the adventure. 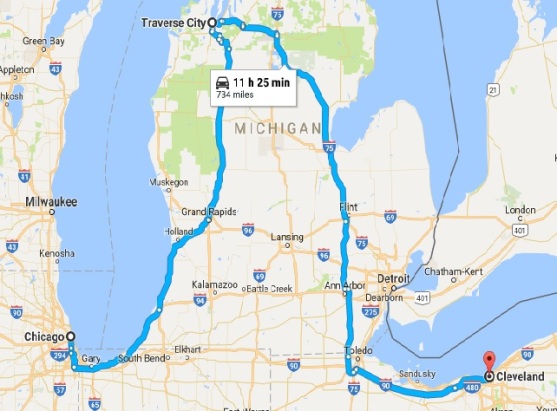 I am pretty excited about this drive.  When I first started traveling for work, I rarely was able to fly anywhere except El Paso.  I’ve made the five hour drive to South Texas more times than I can count, and I’ve previously written about my meandering drive up to Amarillo.  While I love flying too, there’s something about setting out on the open road and being able to stop and see anything you want along the way.  We once did an overnight drive to Tampa, Florida and decided to stop off in Biloxi to play video poker at 3 a.m. just because we could.  We only regretted it later because, as it turns out, Florida is big!  It took seemingly forever to get around the bend and headed south toward Tampa. At that point, with intermittent sleep and three hours to go, a plane ticket sure seemed like the smarter choice.

I’m sure I’ll have plenty of stories to share with you about my many mishaps this fall, but for now I’m looking forward to October, cooler weather, and all the sights along the way.

Until recently, I never had the opportunity to visit Northern Michigan.  My travel there is typically scheduled for early October, which means I get to experience the fall foliage and cool weather.  Of all the things I miss from growing up in Chicago, having an actual fall season is probably at the top of the list.  My first trip to Traverse City came after the second time I had the pleasure of sprinting through O’Hare airport, so luckily I had a window seat to see all the hues of the trees while I calmed and cooled down on the way into Cherry Republic Airport.

What I did not realize was that by flying into Cherry Republic Airport, I was entering the self-proclaimed “Cherry Capitol of the World” (as one could assume from the name of the airport).  Host of the National Cherry Festival every year since 1925, festival participants even hold a Guinness world record for baking the largest cherry pie.  I discovered this after I had wandered downtown and into the Cherry Republic store.  They make everything cherry imaginable: cherry sours, chocolate covered cherries, cherry sausage, cherry salsa, and cherry wine.  Everything was available to sample in-store, so you can imagine the place was pretty crowded.

Most everything was a little too sweet for me, the wine included, but the Cherries on Fire salsa was fantastic.  I love really hot sauces and salsas, so when the sample set my mouth on fire, I decided to purchase one and pack it in my checked bag, just in case TSA would consider it a liquid (you never know).  I had a 6 a.m. flight out of Traverse City via O’Hare to Atlanta (I have such good luck going to Atlanta), so you can imagine how empty an airport with five gates would be at 5:00 a.m.

This time though, the trip was going great!  There was no frantic sprint through O’Hare, and when I arrived in Atlanta at the same DoubleTree that was being renovated the year before, the upgrades had been completed.  However, I kept thinking I smelled Bar-B-Q from the time I had gotten into my rental car all the way to north Atlanta.  When I popped my trunk and the smell got stronger, I had a sinking feeling that I knew the source.

It’s not that I begrudge the TSA for looking through my checked bag after spotting a cylindric blob on the x-ray machine.  But at 5:15 a.m., in Cherry Republic airport, why, after seeing a sealed jar of salsa with a tamper resistant lid that is obviously from the Cherry Republic store on Front Street, would you ALSO decide that you need to open said jar of salsa.  On top of that, could you at least ensure you put the lid back on correctly?  I had packed it securely in a tight spot, so I knew the lid had not been jostled open.  I only hope the TSA agent sampled it and got a rude awaking that early in the morning, because that salsa is hot.

Thankfully, the butcher paper I wrapped the jar in was thick, otherwise it would have gotten all over everything in my suitcase.  And really, who needs to pack perfume when you can marinate everything you brought in the aroma of salsa?  I’m positive I smelled like a walking Bar-B-Q joint for the the remainder of my trip.

I ended up tossing my opened jar of salsa because lets be honest, some TSA agent stuck their grubby fingers in there looking for contraband between the hot peppers.  I was incredibly disappointed until I realized that Cherry Republic sets up a booth at the Nutcracker Market each year.  If you saw me there, I was the one who tried to precariously carry five jars to the counter for purchase, dropped one on the floor, and spilled it everywhere.  I guess the TSA and I are even.

You May Have Missed…